The idea for the store came out of necessity for a bigger production space. It became clear to Fornalczyk and Bertges that they couldn’t continue making their candy out of church kitchens anymore. It was time to find a dedicated space.

“We were actually looking for a production space, but we figured if we are going to have overhead we might as well have a store, so we have our kitchen, our stock area and then we have our store. “The candy is just perfect for people coming in from out of town,” says Fornalczyk “The adults appreciate the novelty; the kids like the candy.”

Before starting Lake Erie Candy Co., the couple owned a gift store in Erie, B3 Gallery and Gifts. “We sold a product that was marketed as Erie’s only edible beach glass, but the problem was that it was chocolate pebbles. My wife wanted candy that looked like beach glass so she decided to go out and make it herself.”

Bertges started dabbling with hard tack candies that looked like the colors you would find washed up on the beaches of Lake Erie.

“It was excruciating amounts of trial and error to not only get the flavor, but to get the shape and size and make it shelf stable,” says Fornalczyk.

They finally got it to the point where it looked and tasted exactly the way they wanted and began selling it in their own gift shop then marketing and selling it to other retailers in the region.

“It was popular, but people wanted other products,” Fornalczyk recalls.

“So we just brainstormed nautical things and these couple of products turned into about 300,” Fornalczyk says.

The labels are also very creative, according to Fornalczyk, and have a high-quality look. The candy business took off so dramatically that Fornalczyk and Bertges decided to sell their gift shop so they could focus solely on the candy. 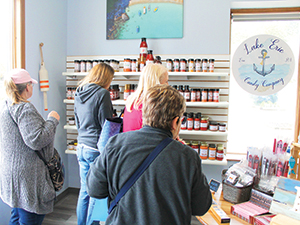 Customers check out Lake Erie Candy Co.'s new retail location.
In selling the store, the couple had a lot of leftover local honey they needed to find something to do with, so Bertges decided to make honey suckers out of them. The “honey pops” contain all-natural ingredients and are available in 30 different flavors. Those became so popular, Lake Erie Candy Co. partnered with Trippie Foods to get them into retail stores. Fornalczyk jokes he doesn’t even know where they all are sold, but any store that has a counter might just carry them.

Lake Erie Candy Co.’s website sells to customers all over the country, and during the COVID-19 pandemic, offered hands-free local delivery. According to Fornalczyk, Lake Erie Candy Co., was the only candy store in Erie to offer free delivery.

“We’d just drop it off and go and people loved it,” says Fornalczyk.

The grand opening of the store was a special moment for Fornalczyk. “Just pulling it all together and seeing it come full circle. To go from one little product, to this, it is pretty neat,” he says.