Come out of your shell

Let this guide help you educate your customers about their special sandy finds. The most popular abalone of them all, the paua abalone is found in New Zealand. Paua is the Maori word for abalone, so this shell is also known as Blackfoot Paua, or rainbow abalone as it can come in a variety of colors. Abalone usually have a crusty, rough surface that is reminiscent of barnacles. This is layer is usually carved away commercially to reveal a surface similar to the shell’s underside. Found abundantly off the southern coast of South Africa, this spinning top shell has a rough, dull brown appearance when first harvested. After being buffed and polished, the shell has a unique and stunningly beautiful pattern of nacre, orange-red and intense black. Dubbed “The Jewel of South Africa,” it is incorporated in jewelry, decor and souvenirs. Commonly found in North Carolina, Florida and Bermuda, the turkey wing is a brownish white shell up to 4 inches long. The shell gets its name because it resembles an actual wing from a turkey. They also make a dazzling culinary presentation. 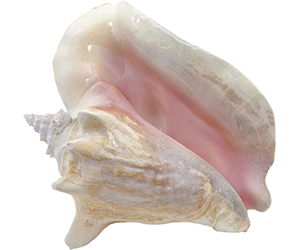 Native to the Caribbean Sea in the Atlantic Ocean, the queen conch is what most people think of when they think of a conch. Conch meat is a staple food for many island people, so the shell is a byproduct of harvesting this important food. The shell has been used by natives to make tools, jewelry, cookware and of course, blowing horns. Today, people use them for decoration or crafting items like lamps and jewelry.
Common Nautilus (Nautilus belauensis) Found in Micronesia, this shell is one of the most popular and recognizable shells in the world. From its distinctive outside with tiger-like bands on its back, to its septum which, when exposed, clearly illustrate the Fibonacci sequence in nature, this shell exudes elegance and harmony. Its septum can be a pearl substitute. It recently became a protected species, but many are still in circulation. Florida’s state shell, the horse conch is found along the Atlantic coast and Gulf of Mexico. Though known as a conch, it is actually a spindle shell. They are considered extremely large by shell standards and can reach 24 inches in length. This is a great shell for decor, planters and bookends.
Calico Scallop (Argopecten Gibbus) Vibrant fan-shaped patchwork with red, pink and orange colors are the signature characteristics of the calico scallop. It is between 1 and 2 inches wide and is found in Maryland, Florida and Brazil. Crafters use these shells to make figurines, jewelry and ornaments.
Junonia (Scaphella) One of the rarest seashells, the Junonia is found in the deep waters off the Atlantic coast to the Gulf of Mexico. The Junonia is a spindle-shaped shell and measures up to 4 to 6 inches long. Its background color is cream with brown square dots. It is the official shell of Alabama. This long shiny glossy shell has reddish brown zigzag markings measuring up to 2 inches. It is commonly found in the Carolinas and Florida and is the official shell of South Carolina. The lettered olive lives in near-shore waters, on shallow sand flats near inlets. Crafters use them to make jewelry and Christmas trees.

HS Seashells and children’s book authors and shellers Maureen Tacito and Marianne Pasqual provided information and images for this article.