Susan Fairgrieve has made ACK 4170 an iconic brand and award-winning store on the island of Nantucket. Susan Fairgrieve didn’t have a plan when she sat down one day in July 2016 to design the ACK 4170 logo. It features the airport code for Nantucket (ACK) and the island’s abbreviated latitude and longitude (41-70), separated by a large X and a small red anchor. The graphic just came out of the blue.

“The crazy thing is that I wasn’t even thinking about Nantucket,” says Fairgrieve, who was born and raised in New Jersey. “I don’t even know how this logo popped into my head, but I knew I had something, so I contacted my attorney right away to trademark it.”

A graphic designer and photographer by trade, Fairgrieve graduated from the Art Institute of Philadelphia and worked in newspaper art departments for many years. Meanwhile, she and her husband vacationed on Nantucket, a small island off the coast of Cape Cod, Massachusetts. It quickly became their “happy place,” she says. “We would sit on the benches on Main Street and daydream about how amazing it would be to live here one day.”

Sadly, Scott passed away in December 2012, so the couple was not able to live out that dream together, but Fairgrieve was still able to find solace on the island. She felt her late husband’s inspiration as her new Nantucket dream came to life. She later realized the serendipity that Scott, who had been born in 1970, passed away at age 41 — giving special meaning to the numbers in her fortuitous design.

Days after making the logo, Fairgrieve set up an Instagram account and started posting photos she had snapped at Nantucket over the years. As her online following rapidly grew, she began developing an entire line of products featuring the ACK 4170 logo. Ever-changing window displays invite customers inside.
By spring of 2017, she had built a website selling her photographs along with branded tote bags, towels, pillows and apparel. She launched the website at Nantucket’s popular Daffodil Festival that April by handing out 300 daffodil corsages with a button featuring her ACK 4170 logo and website.

“I couldn’t believe the response I got the first day,” Fairgrieve says. “I was so overwhelmed and excited.”

As products continued “flying” off her virtual shelves, Fairgrieve realized her idea had the potential for a brick-and-mortar store, and she began looking at buildings on Nantucket.

Finally, she received a call that the cute little cottage she had been eyeing was available, and in April 2018, ACK 4170 officially opened its doors.

Fairgrieve’s first location on Easy Street featured retail space on the first floor with an apartment upstairs. “It was an easy transition because it was my store and housing all in one — easy-peasy,” says Fairgrieve. Since there are no big-box retailers on the island, she made three trips to Nantucket from New Jersey to transport all her belongings, plus merchandise and fixtures for the store.

Located near the ferry station and the island’s iconic Boat Basin, ACK 4170’s first store drew plenty of foot traffic. At first, Fairgrieve loved the convenience of living right above the retail space. But after a few years, she realized that she needed some separation from the business and started looking for a new spot — both for her and the store.

“I started to get tired of living with work,” she says. “I could only access the apartment through the store because there was no external entrance. I vowed when I left that I would not have anything in my new apartment with the ACK 4170 logo on it. You need that separation of work and home to really detach yourself on a daily basis in order to relax outside of work.”

In January 2021, Fairgrieve found an even better location for ACK 4170 on Federal Street, in the center of town, right across from the Visitor’s Center. Now, the store enjoys greater visibility and increased foot traffic, making the business busier than ever.

Prior to ACK 4170, in 2010, Fairgrieve left the newspaper in New Jersey where she worked for 11 years, when the company offered her a buyout.

With her husband’s encouragement, she started her own business, Susan Fairgrieve Design LLC, to pursue her passion for photography. After a birthday trip to the Bahamas, where she photographed seashells, starfish and sand dollars on the beach, she began selling her photography as framed prints, canvases and cards. 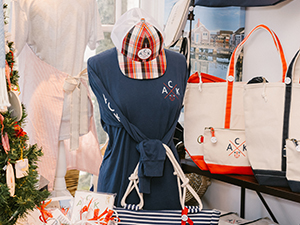 Apparel and bags featuring the iconic ACK 4170 logo are popular with shoppers.
Fairgrieve sold her “Coastal Collection” at art shows alongside other artists and small makers. Her work ended up in more than 200 retail outlets globally. When she moved to Nantucket, she stopped selling her collection to other stores so she could feature it exclusively in hers.

Meanwhile, the friendships she had made with other makers became the key to ACK 4170’s eclectic mix of handmade merchandise. “I started brainstorming all the shows I went to, all the friends I’d made there and all the unique items I could have in my store,” she says. “It just expanded from there.”

For example, a friend of hers from New Jersey makes goat milk soaps. Another friend makes small-batch soy candles with aromas inspired by Nantucket neighborhoods, including the salty smell of Sconset, the “coconut surf wax scent” of Cisco Beach, and the holiday fragrance of Christmas Stroll, named after the island’s popular event.

“I sell over 500 Christmas candles every year. I’ll have a line out the door for them,” says Fairgrieve, who helps her candlemaker concoct the scents for her store.

Other popular items in the store include cutting boards, tote bags, apparel and tea towels emblazoned with the ACK 4170 logo. Stationery made by local artists features nautical Nantucket scenes and landmarks. In total, her small 400-square foot store showcases nearly 80 vendors, almost all of which are one-woman operations just like her.

“I started out selling wholesale, and now I’m on the flipside of buying wholesale,” Fairgrieve says. “I love it because I remember that feeling of, ‘Wow, they love my work and want it in their store!’ I remember how rewarding it was for me, and now I get the same excitement from my vendors.”

Setting up to sell

To keep the mix of merchandise in ACK 4170 looking fresh, Fairgrieve constantly brings in new items and rearranges products. Although most of her merchandise is grouped by category, she’ll frequently “intermingle” items into other sections, in case a shopper missed it on the other side of the store.

“I’ll flip the merchandise from one side of the store to the other so customers will see it differently the next time they visit,” she says. “I’ll walk outside then come back into the store and see what pops out at me first and ask myself, ‘Is that positioned right? Should it be turned or moved?’ It’s like a puzzle, trying to put together displays that will grab the customer’s eye when they come in.”

Over the years, Fairgrieve’s eye-catching displays have won numerous awards from the local chamber of commerce and regional publications. Her artistic design background gives her an edge when arranging merchandise to lure in shoppers.

“If you have a boring window display that never changes, people are going to walk right past it,” she says. “But if you change it up and make it interesting and fun and colorful by creating a scene, it makes people stop and wonder what else is inside. Your window display is your biggest form of free advertising.”

Instead of just showcasing products from her store, Fairgrieve incorporates other nautical props, like ropes and anchors, to create alluring panoramas in her window. Right now, for example, she’s building a beach scene using burlap fabric to simulate sand and borrowing a friend’s beach chair to drape with ACK 4170 branded towels, pails and shovels. Although she has twice as much display space at her new store, with a window on each side of the door, her previous location also allowed outdoor displays. Underneath the arbor that extended over the cottage, she placed a bench loaded with pretty pillows next to a table that held copies of the local newspaper and tourism guide.

“If you have a location where you’re allowed to use the exterior of the store as part of your display, that’s a bonus for curb appeal,” she says. “Creating a scene outside is what brings people inside.”

Even without outside displays, Fairgrieve says an open door is the best way to welcome shoppers. “I’ve observed over the years that people are very hesitant to open a door unless they know exactly what they’re coming in for,” she says. “Most people are afraid to make the commitment. If the door is closed and I see people peeking in the window, I’ll walk outside and say, ‘Come on in! Make the commitment.’ They chuckle, and then they come in.”
In Profiles Bringing his vision to life
Profiles