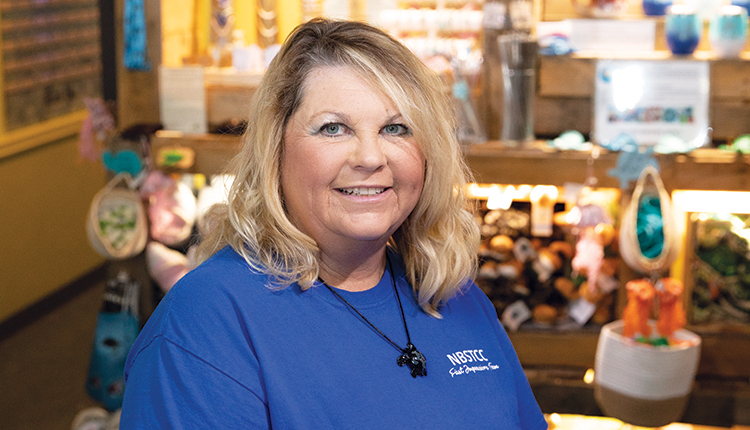 Navarre Beach Sea Turtle Conservation Center’s gift shop isn’t incredibly large, taking up only 240 square feet of the center. But thanks to its new retail director and support from customers and wholesalers, the store is making an incredible impact.

Stephanie Howard moved to Navarre, Florida, in October 2021 from Kentucky to be closer to her parents. There, she had a job of biblical proportions — the assistant retail manager for the gift shop at the Ark Encounter. But even while helping to run the gift shop inside the life-sized Noah’s Ark, she was always dreaming about sea turtles. She even had a screensaver on her computer of the mesmerizing creatures. When she accepted the new position in Florida, her co-workers gave her a great send off, gifting her with one of the large, 29-inch giant sea turtle plush toys that had just shipped to the Ark Encounter the night before.

“The goal of the gift shop is to support the effort of the center and take care of the animals, but is it is also about getting awareness out on the need for conservation.” — Stephanie Howard

“I had always had a love for sea turtles even before this job opened up, so when I saw the job opening for a retail manager for a sea turtle conservation center on the beach (and near my parents), it was a dream come true,” Howard says.

Howard was immediately introduced to the important work of the NBSTCC, including feeding and caring for the animals that call the center home. Popular merchandise promotes “giving sea turtles more tomorrows.”
Photos: Jessica Salort
One of them is Sweet Pea, an 11-year-old green sea turtle that can’t survive in the ocean. She suffered boat strikes on both sides of her body and had to have a front flipper amputated. She also has limited mobility on one of her back flippers. In addition, several fishhooks were found inside her digestive system. Thanks to NBSTCC, Sweet Pea receives a special gelatin-based diet and is now thriving at the center.

Around 50,000 people visit the center each year. They feel an instant connection with Sweet Pea. “It’s her story and that she’s very interactive,” Howard says. “It is hard not to fall in love with her.”

Those visitors often find themselves in the gift shop looking to take a piece of that experience home with them.

The gift shop’s success is critical for the center to be able to care for its animals and keep the rescue efforts going, and Howard is up for the task.

“The gift shop brings in the majority of the revenue to support the center and everything that we do,” says Howard.

Under her management, the gift shop is helping to further the center’s conservation mission. Specifically, Howard carefully selects vendors with a focus on local suppliers and ones that have an interest in supporting the center.

“We have a lot of people in the community that really just love and support the turtles,” Howard notes.
The store gets artwork donated to it from a couple who collects driftwood from Pensacola Beach and creates turtle artwork out of it. “The pieces are amazing. They donate them to us so we get all the proceeds from them,” she says.

A local artisan creates all the mugs for the shop with sea turtle, fish and Navarre Beach designs among the selection. “You can tell they are made in a local kiln. They are heavy-duty and really cool,” Howard says.
Other artwork and photography at the store come from area artisans. “I have one local artist who just sends us his artwork and whatever we make from it goes to support the center,” she says.

The store started carrying jewelry from Roots and Stones after a rep called wanting to give 20% of its sales to the center and place NBSTCC brochures on its tables at shows.

As part of a new partnership with Connect'd Candles, the store now carries a custom soy candle honoring Sweet Pea, complete with her picture and the center’s “Giving sea turtles more tomorrows” slogan on the lid.

Buff City Soaps created a special recipe for the center called Turtle Lovin’ Soap that you can only get at its local store and at the center. A percentage of all sales go back to the center.

Fair trade products are also part of the mix “to bring more awareness to other issues too so that we aren’t just supporting our conservation efforts but efforts around the world,” Howard explains. Buff City Soaps, Connect’d Candles and others create exclusive NBSTCC products.
They include turtle phone and business card holders from Save us from Plastics that are made from plastic bottle caps that were recovered from the beaches of Thailand.

“We also carry notebooks that are made out of elephant poo,” she says. Those are produced by Mr. Ellie Pooh.

Howard has also been adding more logoed merchandise to the offering, including T-shirts, lanyards and ornaments.

“We are trying to get our logo out more so people can see that,” she says. “We are also trying to get some of our plush branded as well.”

Plush Loggerhead and green sea turtles are big sellers at the gift shop. The store carries several different plush toy vendors just to ensure there’s enough in stock, especially with recent global shipping shortages.
Shark merchandise does well too. That’s because the center has a shark tooth treasure hunt for the kids as they wait to enter the center, which can only accommodate 50 guests at a time.

The center also offers a shark school for the kids that teaches them why they are important for healthy oceans.

“The goal of the gift shop is to support the effort of the center and take care of the animals, but is it is also about getting awareness out on the need for conservation,” says Howard. And judging by the popularity of the items, the store is doing its job.