A few steps from the pristine white sands of Mississippi’s Biloxi Beach, a 32-foot-tall shark head opens its jaws to reveal rows of jagged white teeth. Rather than run the other way, visitors to this Mississippi beach town welcome the predator as a portent of good souvenirs and gifts.

Made of fiberglass and wood, the massive shark structure on the pink and turquoise facade of Sharkheads is a local attraction and a beach landmark.

Sharkheads has been owned and operated by the Pierotich family since 1977. It started as a souvenir shop called T-Shirt City in a modest building that was once a gas station. As the business grew, the family bought adjacent buildings, ultimately creating a megastore that needed a unifying, dramatic entrance. In 2000, the shark gaped its mouth for the first time. A variety of Biloxi Beach souvenirs can be found inside Sharkheads.
Photos: James Edward Bates

The idea for the shark was inspired by a souvenir store in Gulf Shores, Alabama, called Souvenir City. “My dad’s friend owned the store in Alabama. We took the one he had and brought it to a new level,” says current owner J.J. Pierotich.

Nicknamed Bruce after the great white shark in the animated movie “Finding Nemo,” the 30-foot shark has served as a worthy ambassador for Sharkheads, says store manager Abe Smith.

“People who come in every day say they didn’t know we were here until we put the giant shark there,” says Smith. “The store’s bright pink with a giant shark. It’s kind of hard to miss.”

This isn’t the first shark head to adorn the front of Sharkheads. The original shark was lost along with the rest of the store in 2005 when Hurricane Katrina struck.

It took several years to rebuild, this time at a higher elevation per new city construction codes. The now three-story, 25,000-square-foot store sits high above an open parking lot with U.S. Highway 90 on one side, the Biloxi West Beach Boardwalk on the other.

The previous shark mouth led to the store’s front doors, giving customers the illusion of stepping into a shark’s belly. Now the shark mouth abuts an exterior staircase and opens to an elevator. This sturdier version of Bruce has weathered the storms better than its predecessor. He became a social media star in 2009 when grainy security camera footage captured him swallowing waves churned up by Hurricane Nate.

Inside the store, Sharkheads prides itself on carrying the largest selection of seashells and “Biloxi Beach” merchandise on the Mississippi Gulf Coast, along with beachwear name brands, including Hurley, Oakley, Quiksilver and Reef.

Specialty goods include homemade fudge in flavors such as cookies and cream, red velvet and amaretto chocolate swirl. Seasonally, the store makes unique fudge flavors such as watermelon, strawberry cheesecake and candy cane.

Smith says Sharkheads recognizes the marketable value of a visually attractive storefront in the social media age. The store maintains a Facebook page with about 3,500 followers and gets plenty of shares on crowd-sourced pages like Yelp. 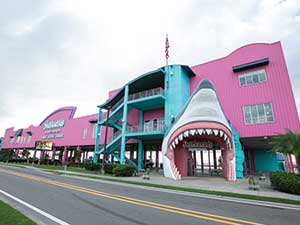 Customers tend to post photos of the giant shark, but also other props around the inside and outside of the store. A shark sculpture busts out of the wall above an elevator, and faux shark teeth frame a photo-op spot with a coral reef backdrop.

“The children love it,” Pierotich says. “They’ll come in and they’re so excited. They line up in the summer time to take pictures in these things and it’s really moving. It renews your faith in families.”

There is the occasional kid who is frightened and doesn’t want to come in the shark mouth entrance, but for the most part, “The kids are so excited,” he adds.

Bruce does have his beauty routine to keep up with. He’s repainted every few years. The neon store signage in his mouth and his glowing red LED eyes also require maintenance.

Despite the work it takes to conserve the shark art, Smith says the iconic storefront is both fun and bankable.

“The benefits far outweigh the challenges,” he says.

Pierotich agrees, “It absolutely has helped our business.”